A group of four people facing an extremely sped up process of ideation based on a research document – that was the setting I found myself in. I did my best to take charge and lead us towards a common goal.

It all took place at one of the workshops that are being organised in Bratislava. Even though, this workshop belonged to an ongoing series, it was the first one of a new season, which also brought new approach and structure to the program.

As all the times before, we were separated into groups of roughly 4 to 5 people. I was part of a 4-member group. The huge difference from previous events was in the focus and outcome. While other workshops were focusing on one specific aspect such as creating wireframe, writing a copy or brainstorming ideas, this one took us through bigger chunk of the process. 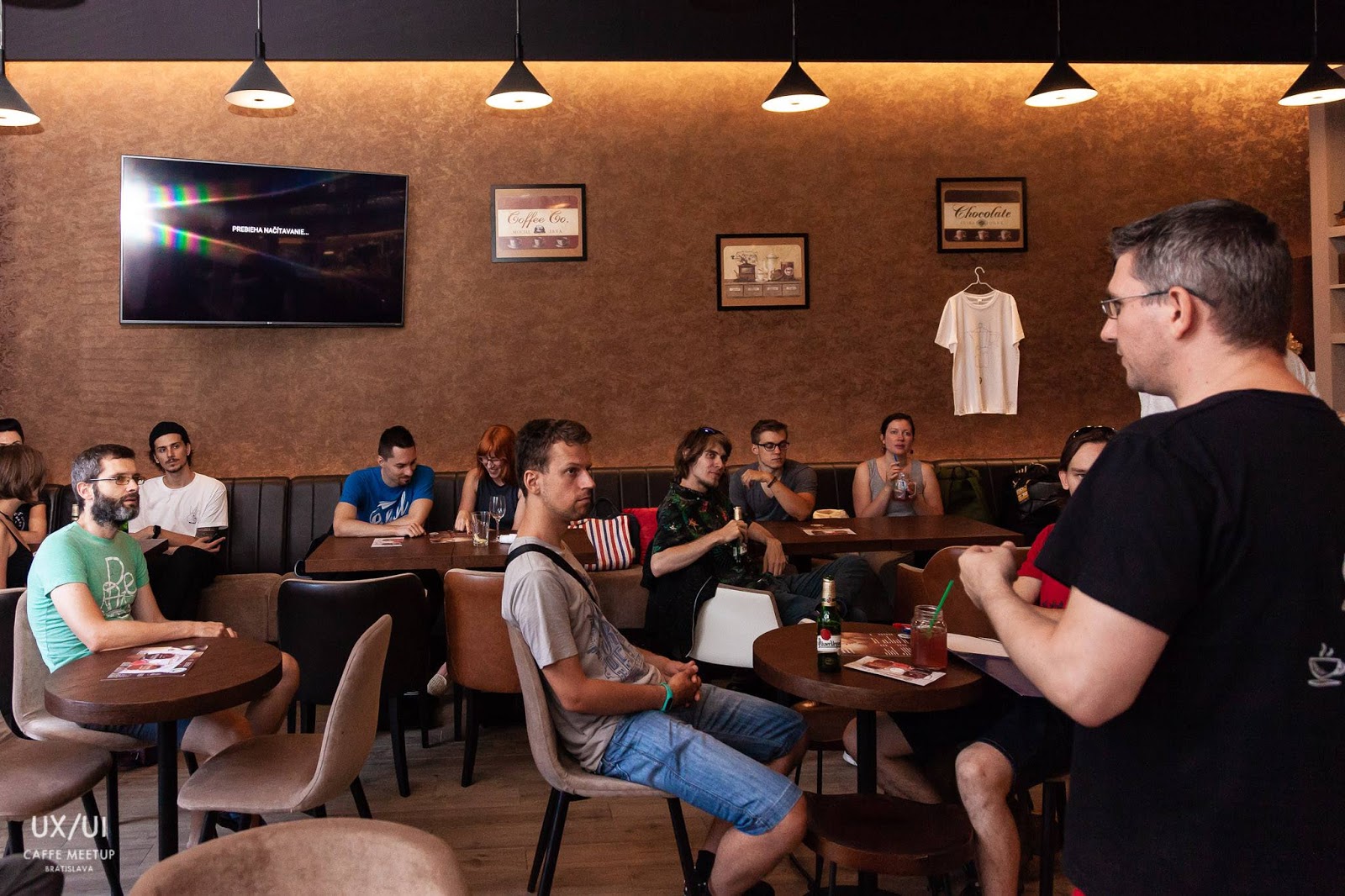 We were handed a paper containing research outputs done by a researcher. It was a very basic description of the task and the problem space. We were given approximately hour and a half to prepare a presentation of our solution which would be showed to others. This included brainstorming features, creating layout and some basic copy, going through the design and making sure it is covering the use cases of the users that were described in the document.

As I was sitting there already halfway through my second beer, I looked around the table and realized the composition of our team:

I knew that two members of my team will need a lot of guidance and that the third one will be of a huge assistance – if heading in the right direction. Sitting there, thinking and taking a sip from the cold beer, I decided to facilitate our little mini-workshop and propose ways to reach the goal.

The student started coming up with ideas right off the bet. I had to stop him to prevent him from boxing himself into a specific idea. We needed to first understand the problem space. Therefore, to start this journey, we wrote down all the problems there could be in our problem space. We were just brainstorming things that could be a problem for the users. I received a huge help and support from the most senior of my teammates in this activity. I believe it helped me get more comfortable and actually pull through as a facilitator. 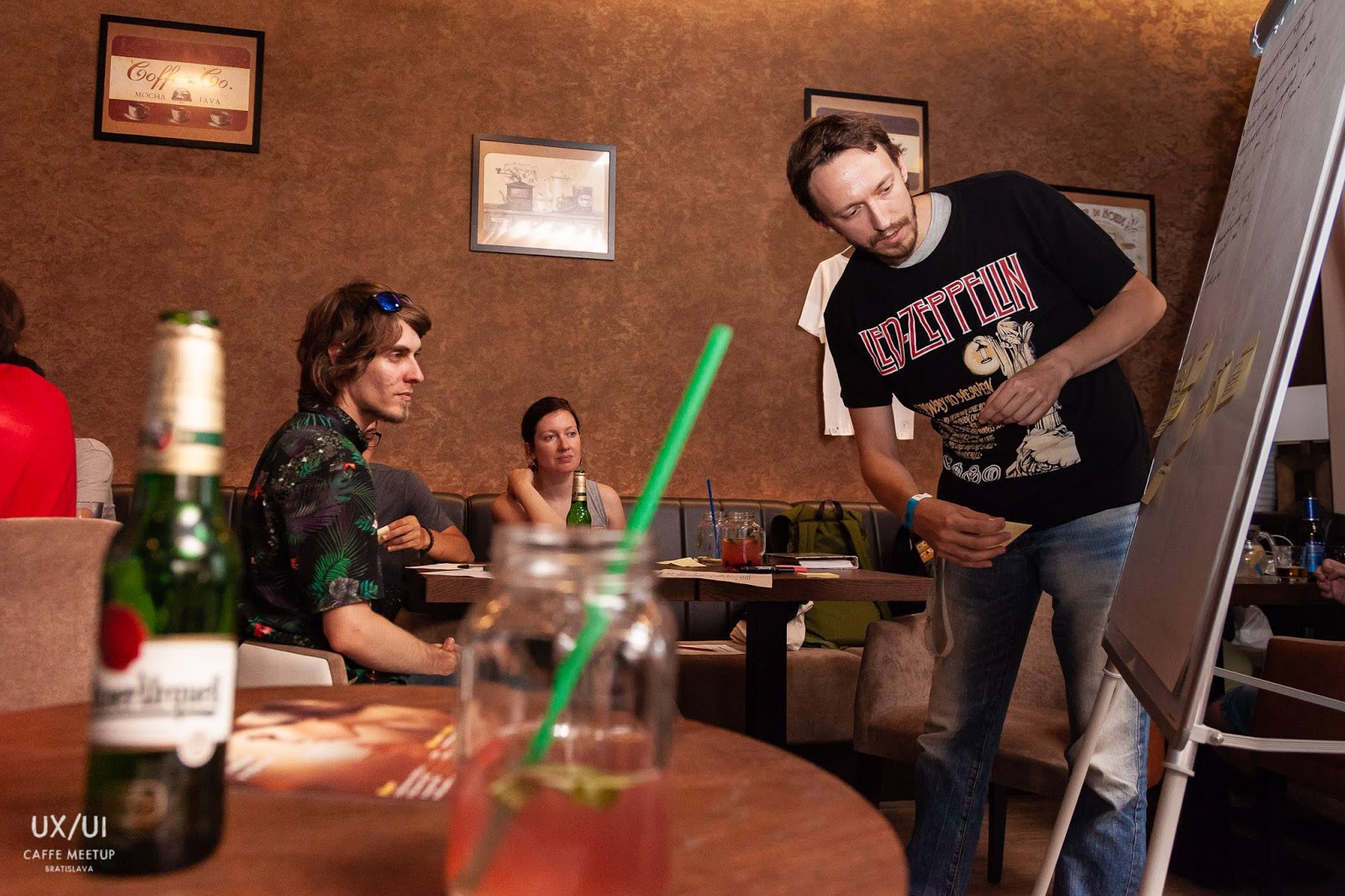 When we had all the problems on the whiteboard, we picked 3 to solved. These 3 were pretty much the same ones that were in the research document. Even though, the exercise did not yield much in different outputs, it made us think about the obstacles users face a little bit more.

Knowing exactly what problems we will be solving and which we will not be solving, I gave everybody post-its and asked them to make up at least 5 ways how we could approach the problems. I made it clear we are not really looking for designs or concepts of how things should look like, but on how they should behave. Once again, we needed to understand what we were solving for and what kind of ideas we could come up with before we start boxing ourselves into specific design. I set a timer to 5 minutes and we began to draw on our stickies.

We had a round of explaining the ideas we came up with. There was no judging or criticising. The point was only to introduce different ideas and explain them to people. Anybody could ask clarifying questions, however, we were not to evaluate the ideas at all just yet.

Under normal circumstances we would vote on the ideas after explaining all of them. These were different times though. We had deadline to hit and after grouping of similar ideas, there were chunks that included stickies from all of us. Assuming the ideas we all came up with undependably on each other will be the best bet to move with – we picked those.

Once we had few approaches we could take and technologies we would want to use in our make-believe application, it was time to start thinking about the design and how it will look. This time I asked for a big A4 format papers from organizer and separated it into 6 parts. I gave one of these papers to each of us and set timer to 6 minutes. We were once again thinking on our own, but this time we were supposed to draw the interface.

Each of us received only one colour as to make the wireframe very simple and low fidelity. This prevented us from spending too much time on detail during drawing and also during evaluating phase. Despite my attempts, I did not succeed in making it clear that we have limited time and therefore the wireframe can be very crude – some people just love to make things pretty. 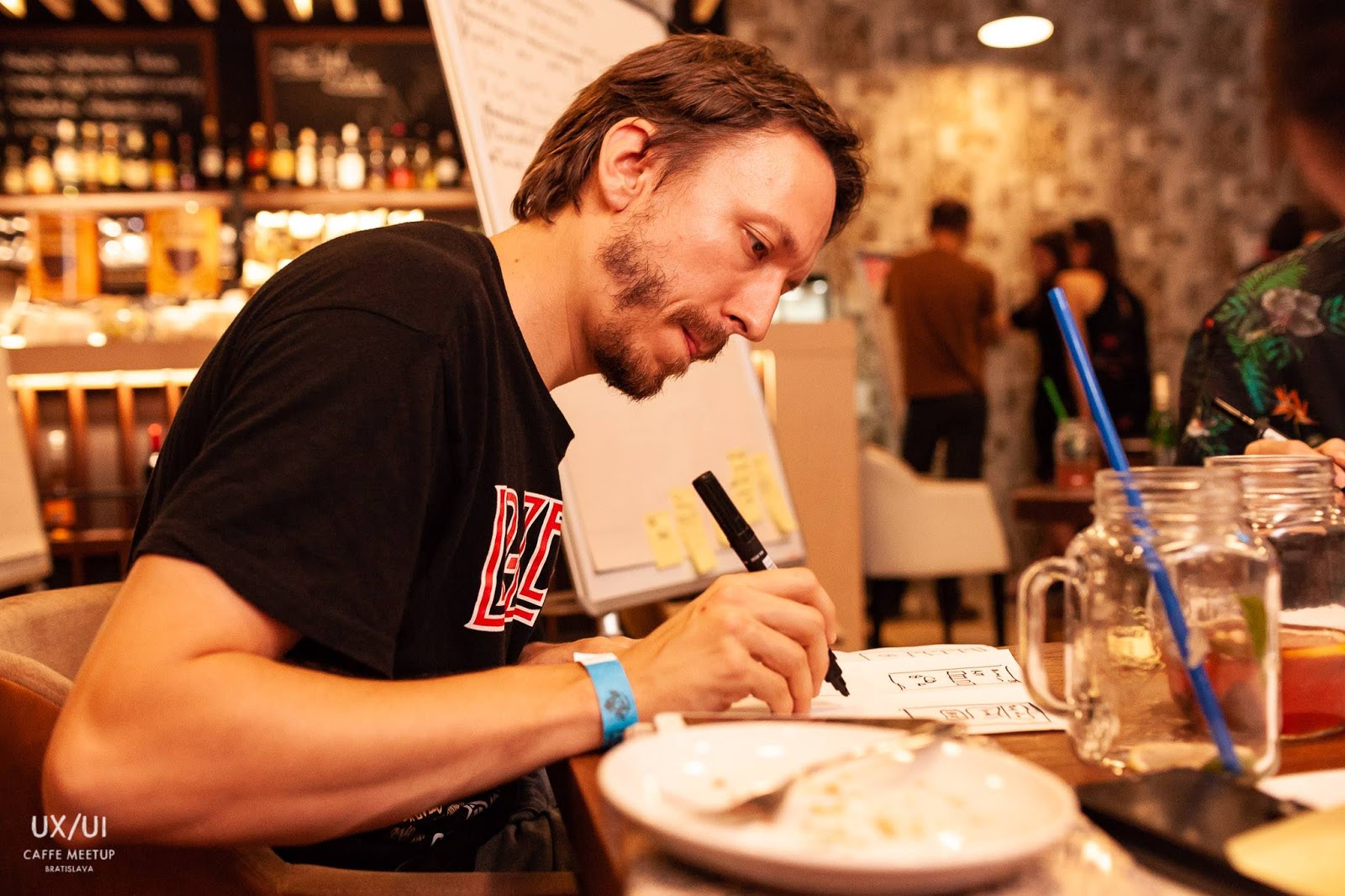 We held another round of explaining our ideas – this time in a form of wireframes. At this point I was getting way too tipsy for my own good and I knew my team member, who works as a project manager, does not really need to practice the following part. On the other hand, student and copywriter were doing pretty good job and I believed it would be beneficial for them to take the lead at our next activity.

Since it would be too much to have 4 voices deciding how the final design should look like, I appointed the student to be a researcher, since he was already thinking about the solutions and the problems. And due to the fact that the copywriter had a need to draw the most beautiful shapes, I appointed her a designer. The researcher and the designer duo were to gather our designs and make the final one. They could merge the designs, they could get inspired, they could absolutely ignore them and make something new – it was up to them. Even though I was hoping they would pay attention to what was made so far. And luckily, they did. I suggested creating click flows – drawing layout of each view and connecting them with lines depending on what element would trigger transition to another view.

Fast forward 20 minutes, our team had click-flow diagram drawn on whiteboard and our researcher was ready to showcase it to the other teams.

We were first to present. I occasionally intervened when my presenting teammate had trouble, or I felt the question he was given was little too much to handle. I did not need to do it often, he was pretty much nailing it with his answers. 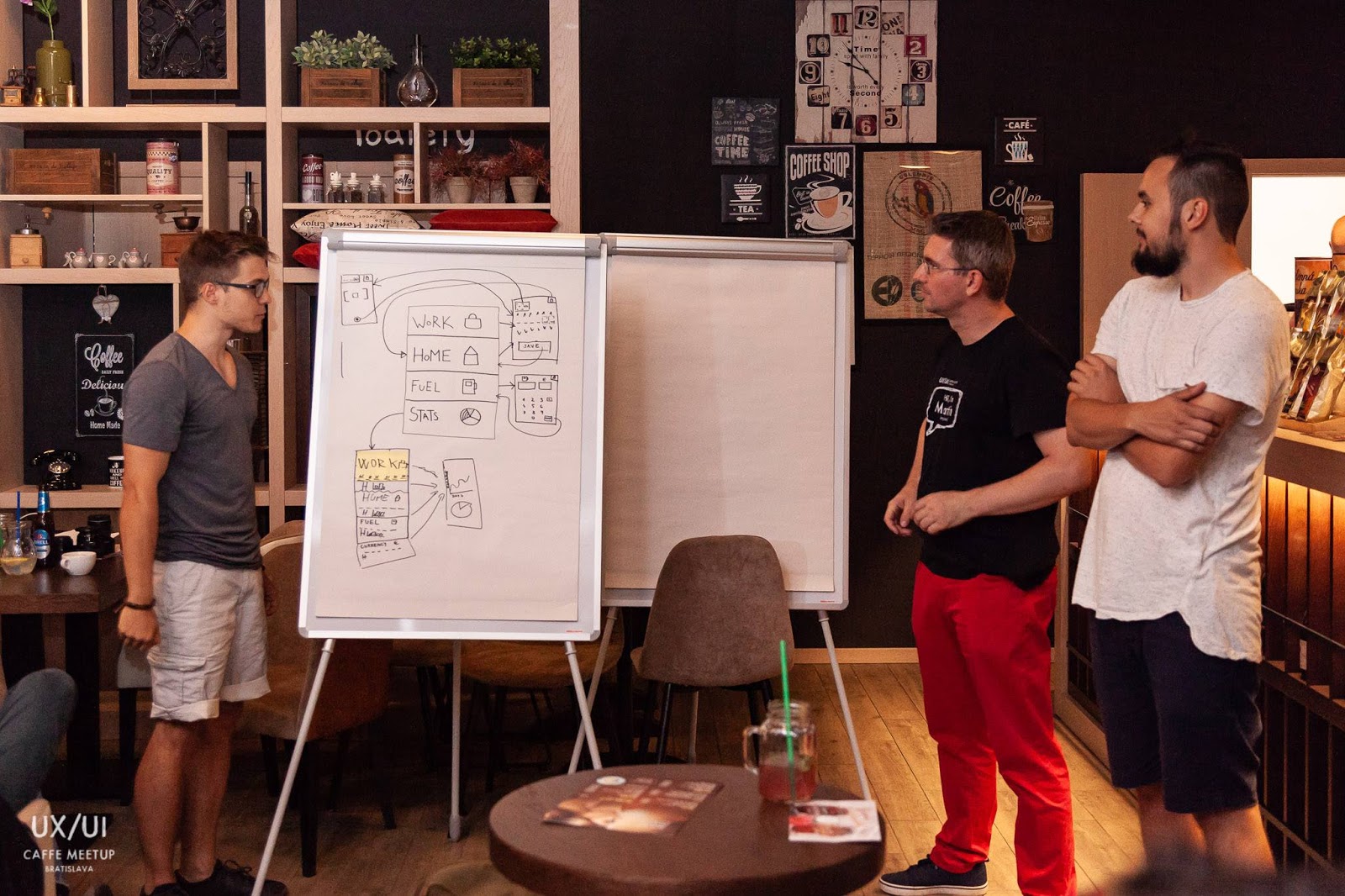 Later that week, I received a positive feedback about this approach. Apparently, we were organized, focused on the problem and a solution, listened to each other and equal in our opinions. The more junior members of our team gained interesting experience and felt very safe while swimming in these unknown waters.

By following practices learned from Design Thinking and Design Sprints, we were constantly paying attention to what we were doing. We did not bias each other, we did not criticize each other, we worked as a team with common vision and goal to get to.

Even though at the end, our design was not the winning one, we were close second with our competition having one less view in their flow. It became very clear that the design which was simpler, was also the winning one. Solving for more problems, adding more technology – that would only add complexity.

We were happy with the experience we gained, and I can say for myself – I am looking forward to another workshop with this awesome team. 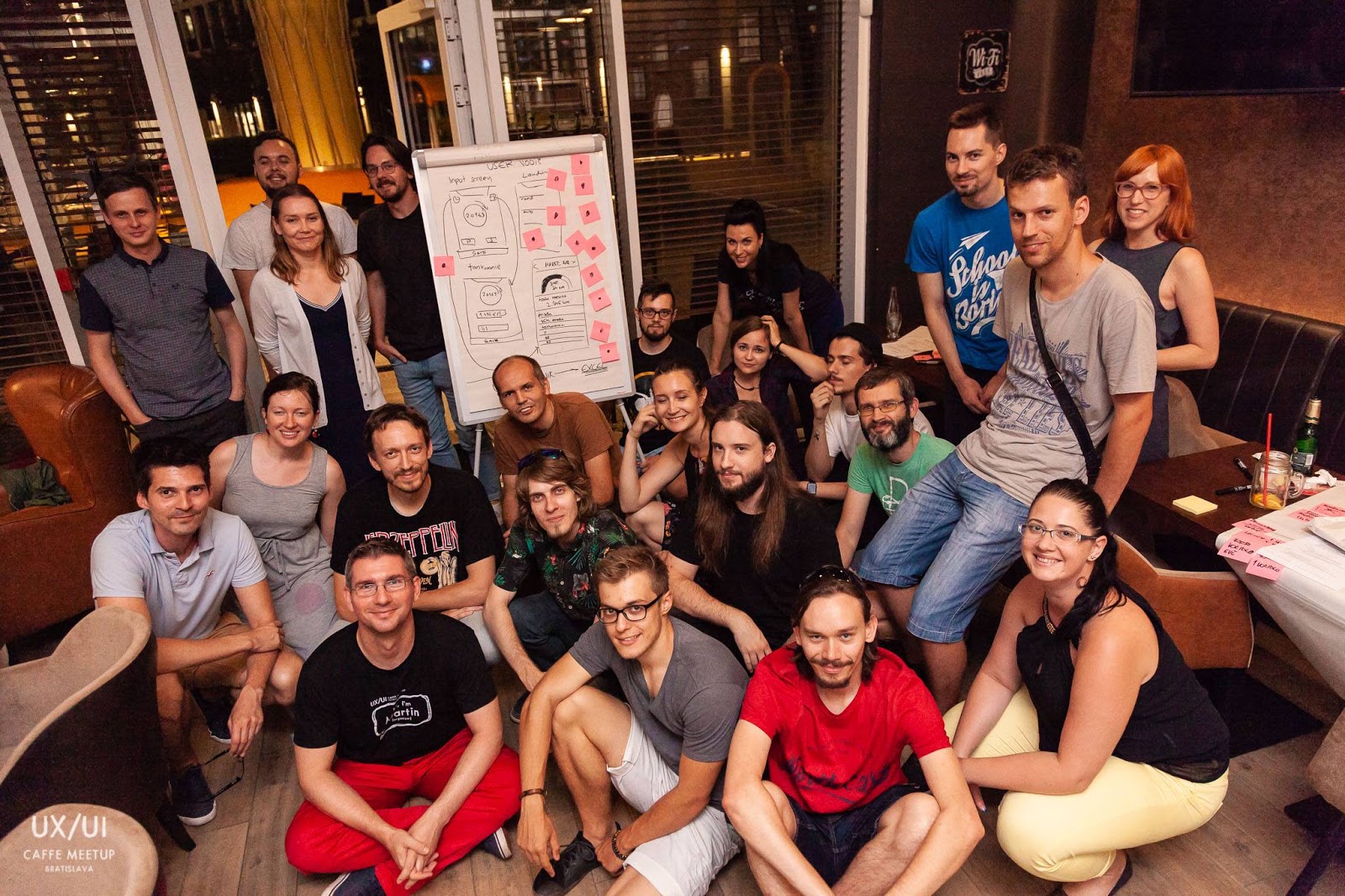