Workshops for students of primary school

I find presenting UX and Design Thinking to adult audience quite challenging and rewarding experience. Having audience made of teenagers can be even more of a challenge. Last week my audience were 5th graders and 7th graders from primary school – children. What were the obstacles, the approach and the result?

Our organization Nation of Technical Excellance (NTE) was cooperating with another school to provide presentations and workshops for students. This time we were asked to come see our youngest audience yet. My colleague spoke about facts and critical thinking, while my topic was design.

To get ready for this task I firstly set out to accumulate some knowledge about whom am I going to be speaking with, what are they like and what can I expect from them. In short, I started with research of the target audience.

Originally, the plan was to only make this workshop for 7th graders, but it was such a success I was asked to do it again for the 5th graders.

Age of the audience was ranging from 10 to 13 years. That proved to be quite a difference from what I was used to. Their communication skills, interests and goals were all different from those of my peers.

Children like to play, draw, be creative. So I used that. They are also less worried about real world around them. But they were of age where they are starting to be competent and aware of their surroundings enough to understand certain principles.

I build my strategy around playfulness and interaction, trying to keep theory to a necessary minimum. Most of the time was allocated for simple tasks revolving around drawing and discussion.

Worrying variable was their imagination. I needed to be prepared for logic I do not understand anymore. Their creativity could go wild so I needed some guidelines. On the other side, they are children and therefore I could not limit their creativity, I had to work with it.

Communication barrier was another aspect I had to consider. No English words, no technical words, no expressions that a child would not understand. Keep it simple but be able to express myself. 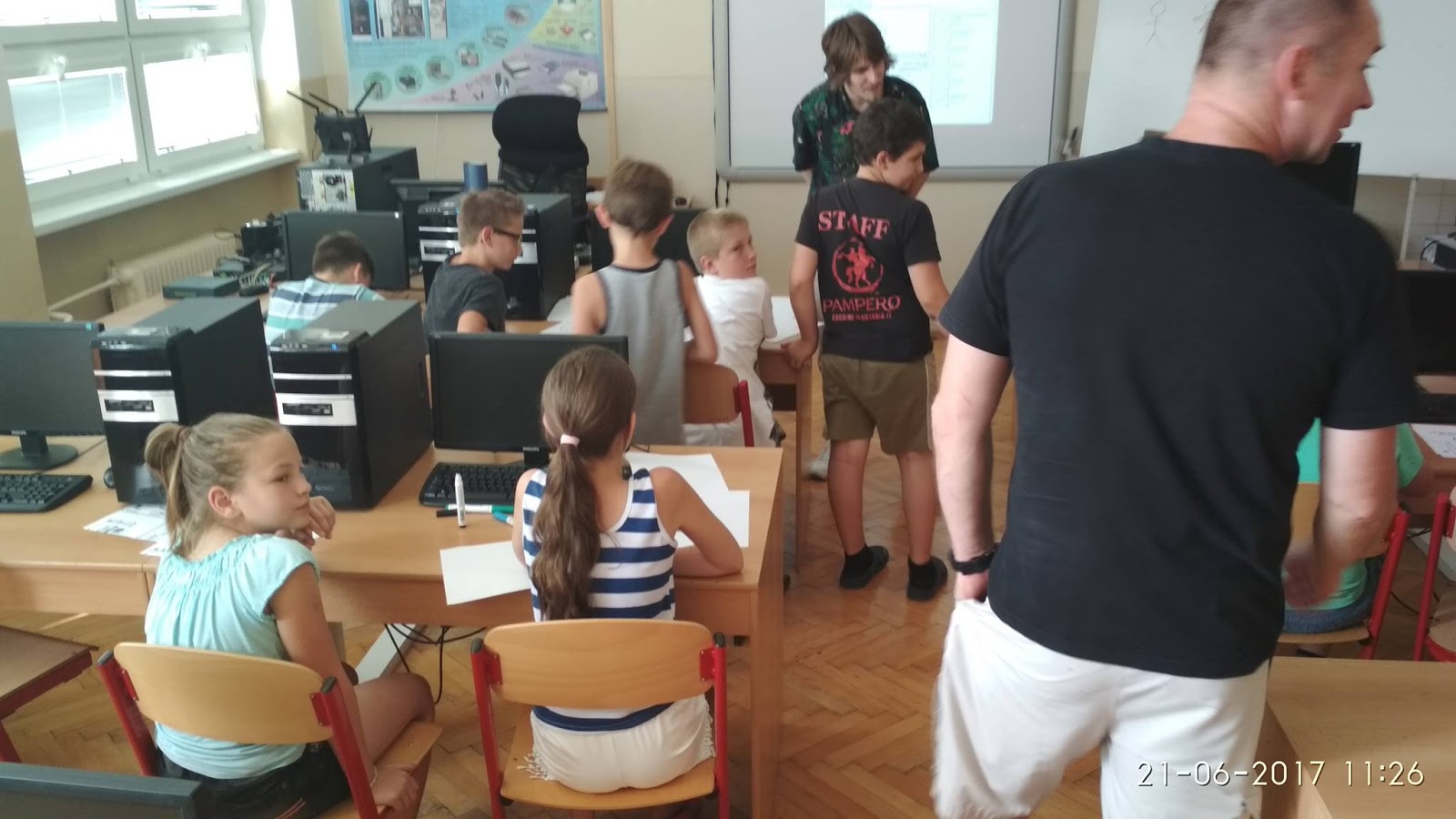 Before the workshop started, I needed to make a good first impression. For these children I was another old dude who came to talk about boring stuff. And so as they started gathering I started addressing them.

I did not want to ask generic "how are you doing" questions or questions other teachers might ask. On the other hand I had to keep it on the level of small talk, not going too deep nor too technical. So I asked what class they are skipping by being here, whether they liked that class.

Since my starting pitch used art, I asked about exactly that. If they paint, model, animate, etc. I tried to keep the conversation going while slowly getting them comfortable discussing the topic of the workshop. 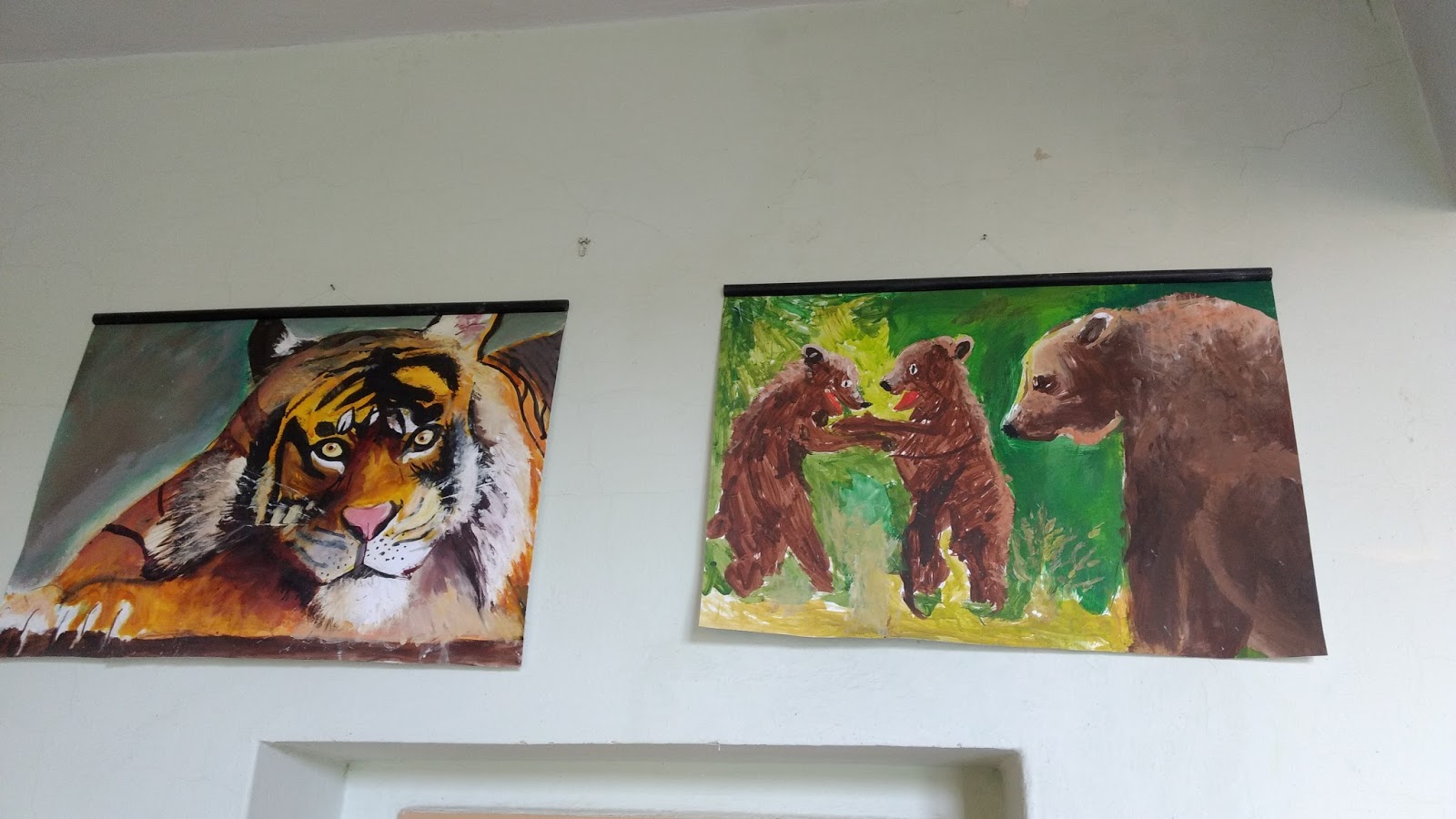 I needed to react based on their knowledge, as it may vary greatly. I wanted to get them curious to know the truth, to listen to theory. To do this I focused on asking questions that students might not have answer to. They just had to be easy enough for them to understand.

To slowly ease the students into the topic I decided to open up with something they might be familiar with – I choose art. I showed the students some pictures of art and some pictures depicting design, and asked them to decide whether the pictures are art or design.

Next step was to give them some background into art and design, to explain the difference. It was time for theory. I carefully made sure it is short not to bore them. In just two slides I named couple of main differences between art and design, focusing on the functionality aspect of design vs aesthetics of art.

I included photos from corridors of the school in between art vs design explanation. I wanted them to connect with the topic and let them know that what I am talking about is right outside the class door, in corridors they walk almost every day. 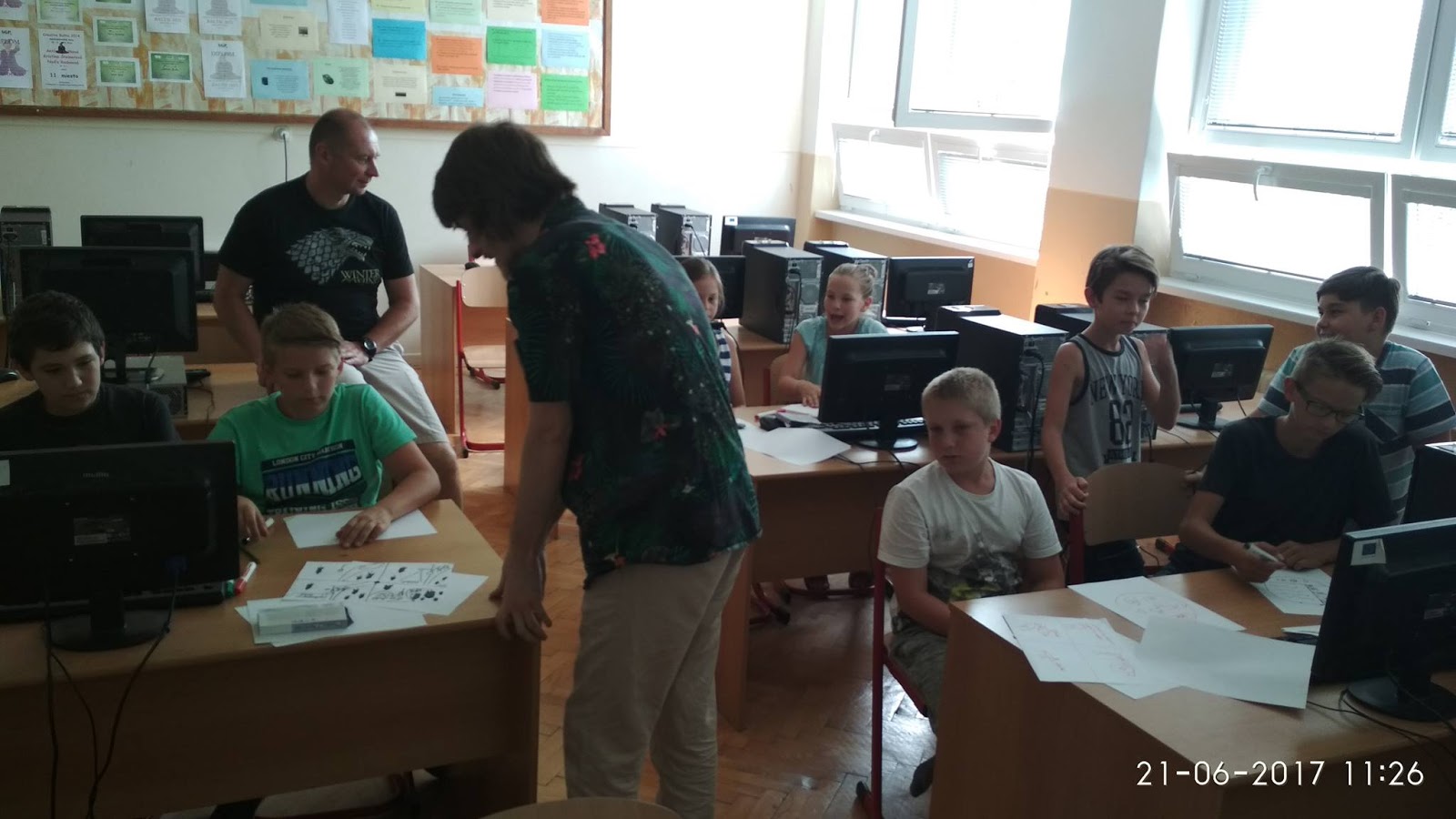 Intro into topic was followed by tasks. I wanted my young audience to have fun, to play around, and to experience designing on their own. That is the best way to get people to remember what they have learned.

First task was to think about a product they could create. I emphasized that it is supposed to solve some problem. This was a straight-forward beginning. I wanted the students to form their thoughts before we truly started designing.

The 7th graders had no problem. They were sticking to reality and solving rather real problems. Some of them were already solved, some of them were little extreme but fun, all of them were doable though. There were ideas such as food ordering app, sports app, machinery for building structures.

The 5th graders were on loose chain. Their imagination made it impossible to stick to reality and so I let them run wild. There was always a way to pull back a little so I simply waited to see if that becomes necessary. Their ideas here included suit that changes you to whatever animal you select, pen that can write instead of you, robot that checks whether store is open, and others.

Those who did not come up with anything could still work on this task during the time for the second task. This was done on purpose because the second task was all about the problem and a solution. 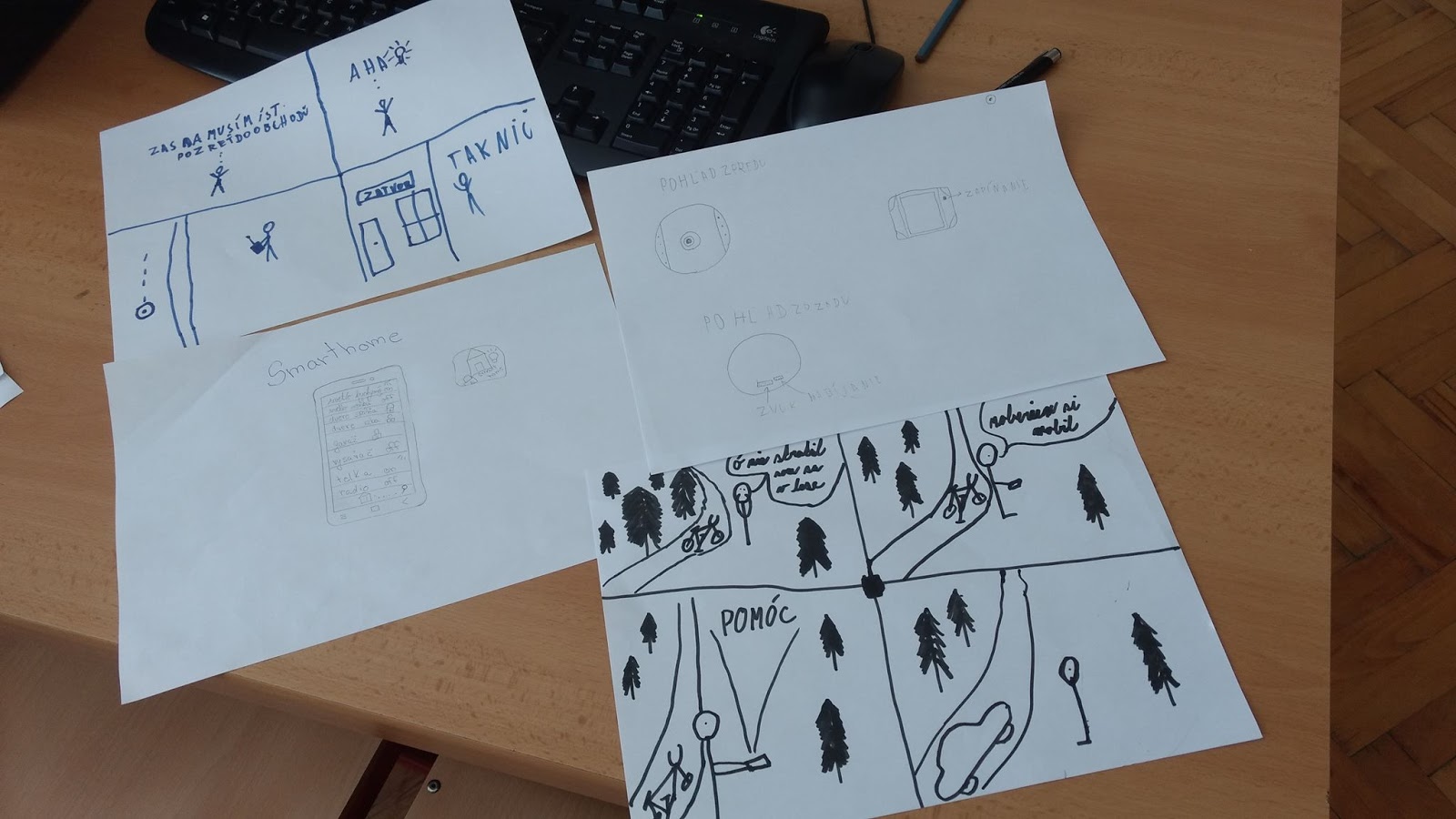 I asked the students to draw comics depicting their users struggling with a problem and solving it using product designed by students. 4 panels were enough:

An easy and yet powerful story that forced the students to think about the meaning of the product. It was no longer only about making something random, now it needed to make sense. It needed to be useful. This was difficult with the 5th graders, but it was still fun.

Those who struggled with creating an idea or their idea for a product was too broad, now had to specify a problem and a solution.

Some of the students enjoyed the drawing and went for quality. Some of them kept it uncomplicated. I pointed out multiple times it was okay to keep it simple. After all, design is not art. 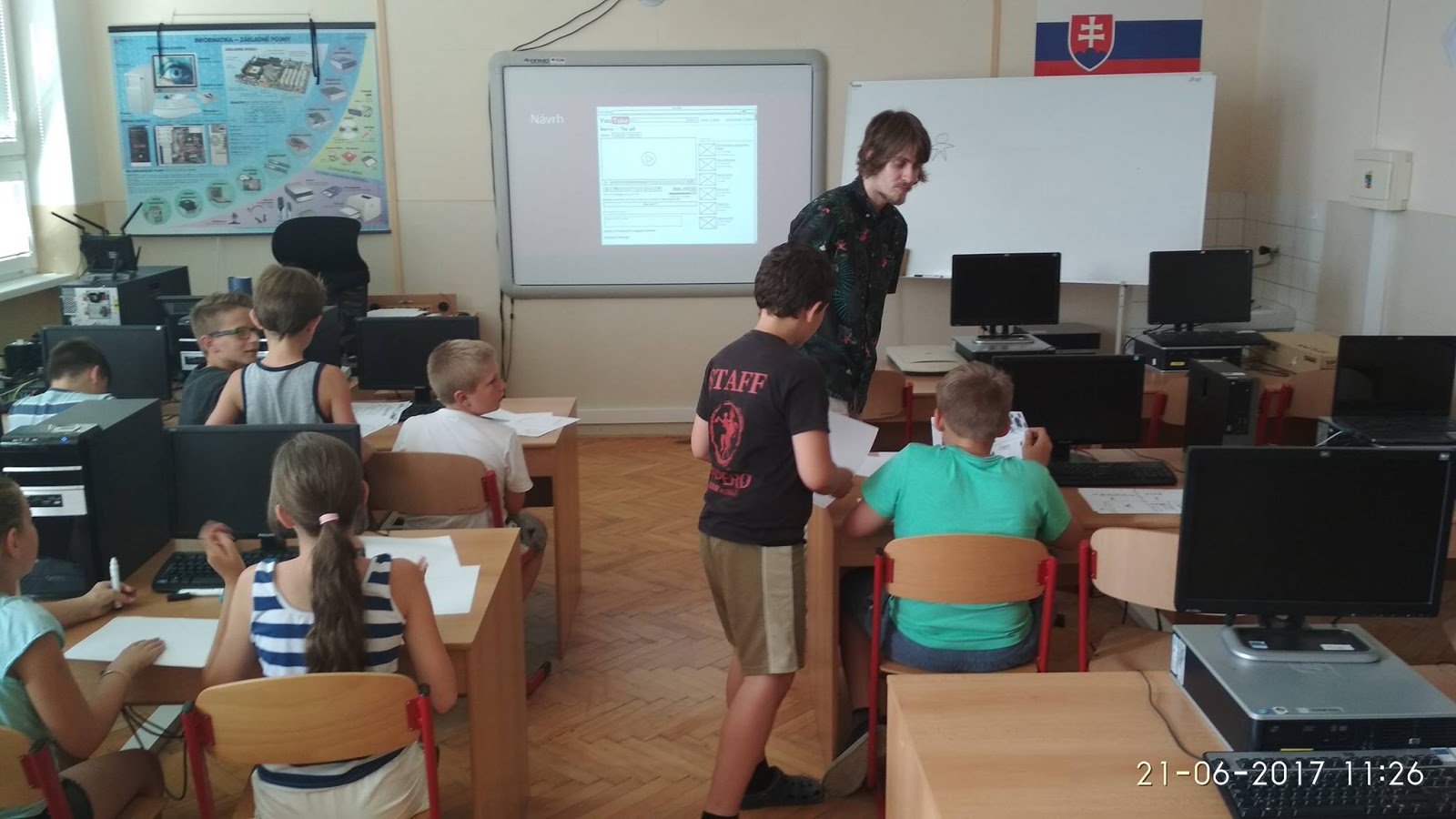 Just one simple black and white view was enough. Although I tried to get the majority of the students to focus on displays, some worked on sketching a hardware.

One of the 5th graders was so natural at this, he also created multiple views and interaction between them. It was inspiring to see someone so young with so much talent. And it all made sense! 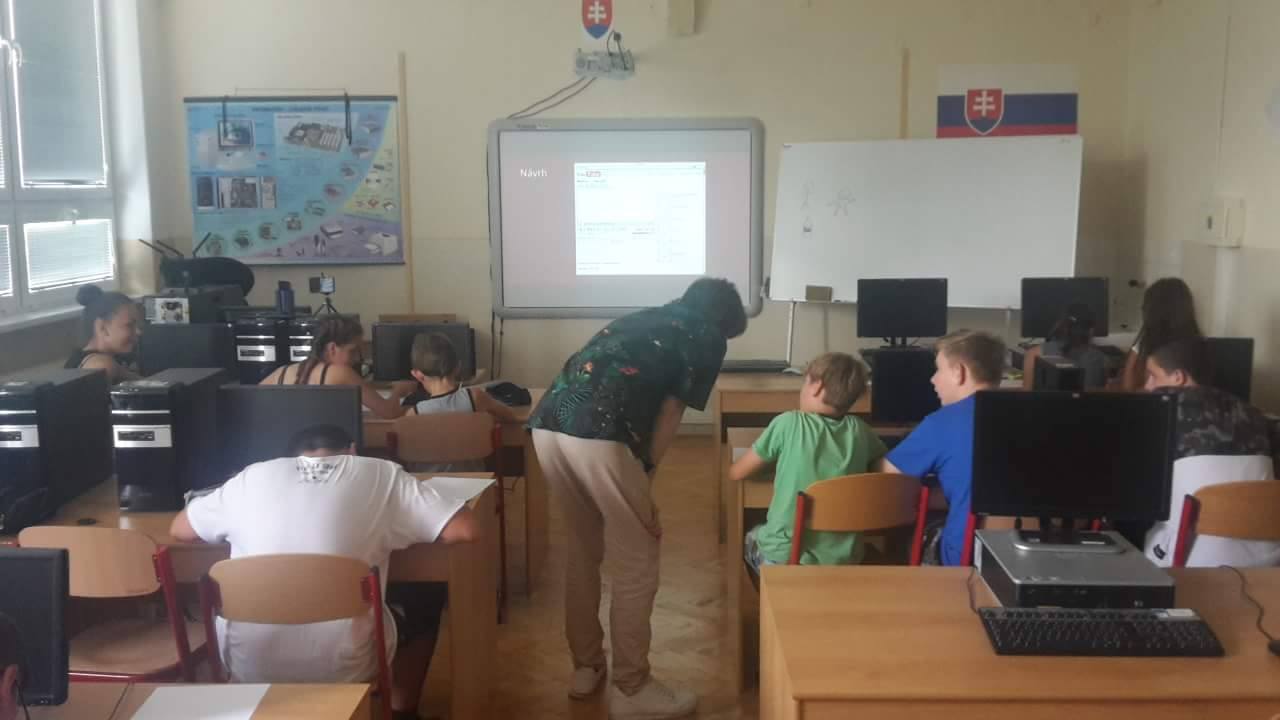 I improvised and asked my colleague and the principal to walk among the students and try to guess what the products are and how they could be used. I wanted for the students to see that people might misunderstand their design or ask questions about them.

I ended summarising all of what happened there. The meaning of design and the ways of doing some of it.

What followed was a massive applause from the students. It caught me by surprise and I had to take a sip of water to hide that I had no casual emotional response to it.

Principal came to the front of the class and started showing individual slides as he was explaining how to do a good presentation. He stopped on my slide about research, which has been visible during the first task when the students needed to think of a product they wanted to design.

Second applause occurred alongside a second sip of water. And the workshop was finished.

Evaluation of the experience

It was important to move in between the students and talk with them, try to help them, make them all feel special but also equal, provide feedback to let those best improve even more without criticizing too hard and creating hostility.

Majority of the students were extremely active. I cannot tell for sure whether it was my way of making first impression or the culture of the children, but they all started talking with me without being afraid or even feeling the need to raise a hand. They were having a discussion instead of being shy, which is something very uncommon in Slovakia.

I found out that I felt less stressed interacting and improvising than to be presenting something I had prepared. By opening up to students I not only relieved their stress levels, I also relieved mine.

This workshop helped me realize many things about younger students and about myself. It helped me think differently about workshops and gain some of the soft skills I lacked.

I can safely say, I am not done yet. I will continue learning and teaching others. But from now on though, I will try to be lot more interactive when possible.